“the show was a

Amitabh Bachchan is an Indian film actor, producer, television host, and former politician…  dubbed India’s “angry young man” for his on-screen roles in Bollywood,  Later on Referred to as the Shahenshah of Bollywood, Star of the Millennium, or Big B,  He is a Legend !!!
Bachchan is widely regarded as one of the greatest and most influential actors in the history of Indian cinema as well as World cinema..
Jehangir Ratanji Dadabhoy Tata  popularly known as JRD Tata, was a French-born Indian aviator, entrepreneur, chairman of Tata Group and the shareholder of Tata Sons. JRD Tata was a (29 July 1904 – 29 November 1993)Born into the elite class Parsi family of India, the Tata family, he was the son of notable businessman Ratanji Dadabhoy Tata and Suzanne Brière, the first woman in India to drive a car. Tata became the first licensed pilot in India, in 1929. He is best known for being the founder of several…

The Thanksgiving blog from this awesome lady.

Drawing of my husband with his eyes closed – November 2019

I had a dream that I was normal and didn’t have Alzheimer’s. I saw myself walking normally, happy, laughing, and not at all impaired. Just the woman I used to be. Sociable, gregarious, not agitated, not depressed. In the dream, I was in a large festive bar and met a man, a robust fellow, who was very enthusiastic, friendly and full of life. I looked for my cousin Joyce to introduce him to, and found her and invited her over. She was just like I always remembered her to be, full of life, cracking jokes. She was glad to meet him. The only strange thing was that as he spoke to her, she started to levitate. He was very tall and she is short, and somehow his gaze made her rise up to meet his height, so they were…

I feel it is important to preserve this woman’s blog

I began writing this on the last day of 2019, the last day of the decade. It’s obvious that it will be 2020 when I’m able to complete it. It doesn’t matter. The date has nothing to do with this ongoing battle. I remain truthful about the unraveling of my brain. Can’t hide the truth.

Inspiration and imagination have been hard to come by so this drawing surprised me. It’s not one of my best, but it showed that I could still be imaginative. The inspiration was a mixed media sculpture I made 40 years ago. It was a birdhouse I crafted out of wood, and  covered it in green and black polka dot astroturf. The top looked like a house with it’s gabled roof flung open. On the wall near the sculpture, I glued guinea hen feathers in an arrangement…

One of my favourite characters of the 1066 story is the Norwegian king Harald Hardrada. Harald led a fascinating life, even before his ill-fated attempt on the English throne; exiled in Kiev at 15, while seeking his fortune in the east he became captain of the famous Varangian Guard before returning to his native Norway to become king.

When I started writing Silk and the Sword: The Women of the Norman Conquest I discovered that there were several Kievan links to the story of 1066. The baby sons of England’s short-lived king, Edmund II Ironside, who reigned and died in 1016, were given sanctuary and protection in Kiev, saving them from the clutches of Edmund’s successor, King Cnut. And after the Conquest, Harold II Godwinson’s own daughter, Gytha, would make her life in Kiev as the wife of Vladimir II Monomakh; she was the mother of Mstislav…

I know it’s been quite a long while since my last blog post but I had a lot of things going on in 2019. Please excuse my absence but know, my posts will now be more frequent.

As Jimmy Buffett sings, “It’s those changes in latitudes, changes in attitudes
nothing remains quite the same.”

When you stay in one place too long (or maybe I should say, when “I”stay in a place for too long,” it’s time for a change.
I spent the first 30 years of my life in New Orleans, LA. It was a great place to grow up. Mardi Gras, Saints, food, friends, phenomenal music, food, family, fun, food . . . (did I mention FOOD?) I mention food because it was a huge part of my life . . . 285lbs of huge and probably the cause of my Type2 Diabetes and Heart Disease, but…

In 1951, cowboy crooner Gene Autry released a song titled “The Three Little Dwarfs,” that playfully told the story of three “helpers” trusted by Santa to “drive” his sleigh on Christmas Eve.

The song was written by Stuart Hamblen, a singer, songwriter and politician who ran for President of the United States in 1952 on the Prohibition Party ticket.  “A cowboy singer, former racehorse owner and converted alcoholic,” Time magazine wrote that year about  Hamblen who picked up 73,000 votes, second most by a third party candidate.

Before politics, the Texas born Hamblen was known for being one of the first singing cowboys and in the 1930’s hosted a popular radio show called “Family Album.” 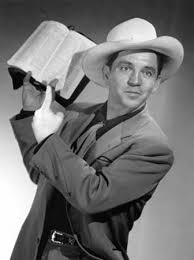 Hamblen wrote several hits for country radio but nothing quite as enduring as “The Three Little Dwarfs.”

The most famous singing cowboy, Gene Autry recorded the song and released it…

Anniegoose's Blog
Create a free website or blog at WordPress.com.