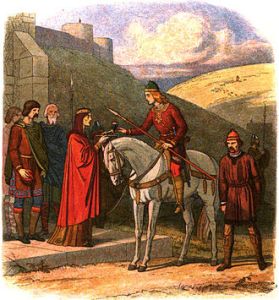 After writing an article about Edward the Martyr the other week, I thought it only fair to take a look at the other side of the story and write about Ælfthryth, England’s first ever crowned queen and Edward’s stepmother – and possible murderer.

Author Annie Whitehead researched Ælfthryth for her book Alvar the Kingmaker and rather likes her. So she can’t be all bad – can she?

Ælfthryth was probably born around 945; the daughter of Ealdorman Ordgar of Devon and an unknown woman who is said to have been descended from the royal family. As you can imagine, after the passage of more than 1,000 years, nothing is known of her childhood; although she had a least one sibling, a brother, Ordulf, who was founder of Tavistock Abbey. She was married around the age of 11 to Æthelwold, the son of Æthelstan Half-King…